Rainbow Flash of the Wizard 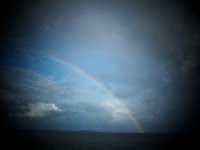 ...imagine, my lovely big kitties, as the Kougar was awakening from her slumbers today...the Wizard of Oz appeared...no, not the man behind the curtain...but the memory of the movie...it is that time of year...so, the Kougar is remembering that the actual story is not a children's tale, but a grownups tale about the evil doings of bankers...gee, is this sychronicity in action, or what...then, moi's favorite song begins playing in her head...the young beautiful Judi Garland singing Over the Rainbow...
...so still waking up the Kougar clicks over to the Liquid Silver SEx blog to check on the flash-ing action...and what does she find?...why, wonderful author, Jeanne Barrack, calling for all colors of the Rainbow Flashes...well, it doesn't hit moi's brain, the lucid dreaming connection...until the Kougaress is typing in a comment, and a promise to pen a flash...then, pow! It ain't no coincidence my kittens...and would you believe, the Kougar understands if you don't...but moi began her rainbow flash with a Wizard without conscious thought about the Wizard of Oz...ah, the subconscious or the soul at work...
...just for the Big Cool Cats two more flashes have been added to the Kougar's Flash of the Caribbean Vampire ~ Cruelty... ~ ...and, tomorrow, the serial flash Blocking My Sun continues...
...shaking her furry mug, the Kougar hasn't figured out yet, how to continue her serial flashes on the blog as they grow in length, and become too long for one blog entry...since she hates to add another click to another page, not liking to extra-click herself...ah, the never-ending problems of life...

TO BE CONTINUED...
Rainbow flashing kiss from the Kougar...
Posted by Savanna Kougar at 10:51:00 PM