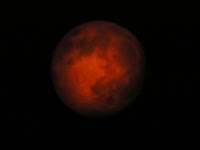 My Beautiful Big Cats, tired of all the bloodsuckers starring in the Nightmare on Wall Street? Well purring-rumble, the Kougar has a pre-Halloween treat for you...

"Beware, the Bloodsuckers," Kristyn dramatically intoned . The latest news about Wall Street’s plunge straight toward hell streamed across the top of her computer’s monitor. On the TV, in the background, Conan O’brien posed, shook his red hair like a rooster on steroids, and paraded for the approving squawk of his audience.
Once the website had fully loaded, Kristyn, middle-aged unpublished writer, blinked in sheer disbelief as she read and clicked. Leaning forward, she stared closer at her 19" screen. Not only with disbelief. A rabid curiosity seized her. The ink-black and blood-red, graphic-impressive site all about vampyres was definitely a spooky thrill, and highly informative, and had certainly aided her research for the erotic romance story she’d just started. But...omygawd...
"Can’t be real," she muttered. Hunching forward, a bad habit, Kristyn squinted her eyes as she often did, since she was near-sighted. And her eyeglasses only caused dizziness. "Stranger than fiction," she muttered again, amusing herself as she re-read the advertisement written in old-fashioned font on a parchment scroll. "There are more things in heaven and earth than are dreamt of...Shakespeare," she murmured.

Eagerly desired: Those humans who wish to be cherished
while performing the invaluable service of feeding our visiting
galactic brethren, the Translexion Vampyres, who arrive to
battle the gathered Dark Forces, and also arrive to assist us
in bringing forth the enlightened progress of Earth.
May It Be Blessed So

Shaking her head slightly, she read over the advertisement once again – scrutinizing for anything that could tell her if this was a hoax, just for scary fun – or for real. Bizarre real. An avid listener to Coast-to-Coast AM, Kristyn had studied paranormal subjects and the metaphysical most of her life. She kept an open mind to any possibility, no matter how weird or far-out – part of her nature ever since she could recall. Besides, she had her own tried and true intuitive abilities.
Nothing with vampyres though. She wasn’t into the whole Hollywood bloodsucker horror thing. Although a gory red-running feed on the golden parachute CEO’s, and on the spa-luxuriating executives who’s just been bailed out by the tax payer...well, there was a movie she’d cheer for, and watch.
Suddenly something sizzled in the pit of her stomach.
"Wow," Kristyn whispered. Sitting back a bit, she blinked several times and wondered how many ‘humans’ had bitten, then been bitten – ha, ha. How many had already decided to be ‘cherished’. Only those who liked vampire dress-up, got off on blood drinking – obsessed over the whole tall, dark and vamp mystique?
"Maybe it’s just a publicity stunt for some upcoming movie project."

Scrolling down, she read the cautionary warning.
Be fairly warned. Those humans who chose this path
will have chosen a journey that cannot be undone.
Search your soul, your heart, your mind and spirit,
dearest one. Think from the deepest recesses of your being –
if this journey belongs to you. Before you speak these
ancient upon ancient words. Before you promise yourself
in the service of this sacred binding spell.

Tingling eerily, Kristyn slowly read the words of the spell, that if spoken aloud would bind one in service agreement to a Translexion Vampyre. However they were different from home-grown Earth vampyres? She shrugged. She certainly had no clue.
"It’s in english, how ‘real’ can it be?" she muttered to herself. Should she speak the words out loud? Her perverse wild streak duked it out with her ultra-careful wary side.
More eeriness shivered through her. Last evening’s vivid scene played in her mind. When the hellishness of her life had, once again, overcome her. And she’d insanely shouted – she might as well let a vampire suck her blood, kill her – words she’d never spoken before, never even thought of before. She’d morosely included that if a guillotine was close by, she’d use it. Since a fast falling slice of a blade had to be a fairly quick death.
At the time, she’d meant her words.
After her desperate explosion against the terrible hell of her life, she’d considered how odd it was, she’d yelled about feeding a vampire – given she was the scream or faint-at-the-sight of gushing blood kind of woman. In the past the very thought of being fed on was abhorrent, icky, nauseating... disgusting. Except she’d been researching romance novel vampire heroes – and then there was the whole Buffy and Angel thing...the fantasy just too good. Too wickedly enticing...
Locking her fingers, Kristyn stretched upwards. She kept her gaze focused on the ‘sacred spell’. Eventually releasing the long stretch, she sighed down to her worn-out soul. Truth-to-tell, she was tired of thinking ‘anything’ and ‘everything’ through to the nth degree in her life. Tired down to her fifty-something bones.
She spoke the spell. Added a dramatic flourish.
She waited. Silently.
Nothing.
On the television screen former Captain Kirk entertained a squeamish Conan with reality, how he collected stud sperm. And life, the dull hellish horror it was, moved forward...unceasing in its torture.
Summoning up Coast-to-Coast AM on internet streamlink, she turned off the tv, then continued her non-existent writing career.
Arrival..., the webmail was titled. Relenting to her curiosity, she opened it, though usually most webmail moved straight into cyber delete.
Your journey on beloved Earth begins anew, our dear one. Who you seek in sacred incantation, the Vampyre you have summoned, arrives...
"Too creepy," she murmured. Shivers began, then rapidly escalated to nasty goose bumps.
To most you may be one person, to me you are my cherished world...the masculine whisper invaded her mind. Instantly Kristyn felt shrouded in deepest darkest shadow.

Blood-red lipstick kiss from the Kougar...