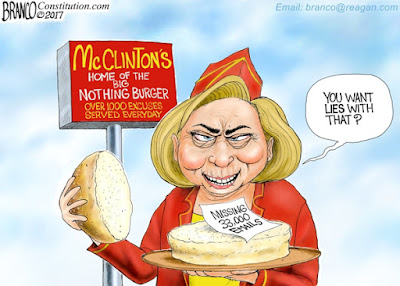 Friday night yowls, cutest Kittens ever ... Indeed, it is purely mind-boggling to this Big Cat that two-faced corrupt-up-to-the-eyeballs Comey was actually head of the FBI... no wonder he was loathed by many of the rank and file FBI agents, those who actually cared about getting-arresting the bad guys/gals. As the Kougar looks back at what she witnessed of Comey's often-comical testimony before congress, she has to ask: WAS HE MANUFACTURED IN A BLACK-OPS LAB??? 'Cause even your common and cute weasel critter couldn't be this writhing-devious, this tricky-twisty deceptive when facing a predator.

Now, here's another Kougar-thought: James Comey could have been on the Clintonista hit list... you know, the Hildebeast and Rapist Bill faithfully follow that adage: dead men tell no tales ... and neither do dead women. Comey might have rightly figured that if he makes his *crimes* public, if he reveals that he was told by former Attorney General, Loretta Lynch, to call the investigation into Hitlary's gigundis list of crimes ***a "matter instead of an investigation"*** that he could save his own hide from the Clinton's personal straight-from-hell reaper -- and not end up pushing up those proverbial daisies. Yeah, it wouldn't be so smart of the Clintonistas to OFF Comey at this point, would it?

'Course, this little dark-comedy sideshow before congress, whereinwhich, PERJURY is the real star, has somewhat eclipsed the American hero, Seth Rich -- his murder. However, that whole horror-situation WILL arise like a determined phoenix and assist in bringing down the ENEMY-MSM, in the end. As well as the demon-crats. And the Rhino Republicans.

A MOST EXCELLENT LOOK AT THE COMEY HEARING ...

Where was the devastating revelation about Trump’s crimes during James Comey’s Congressional testimony yesterday?
“Who produced this stinker? Find out and fire him. I thought I was the head of a movie studio. Apparently, I’m marketing sleeping pills. I conked out after watching five minutes of Comey…”
If James Comey’s testimony before Congress yesterday were a Hollywood movie, and if the press weren’t obliged to make a very big deal out of it, the studio that produced it would have shut it down and eaten the box office losses. The movie theaters would have been empty, except for a few stragglers getting out of the rain.
We did learn that Comey leaked his “memo” of a conversation with Trump (about the Michael Flynn investigation) to the press. So the FBI director is a leaker. And we only have Comey’s word that his “memo” notes were correct and accurate.
Then Comey stated that Attorney General Loretta Lynch told him to call his investigation into Hillary Clinton’s private email server a “matter,” not an investigation. So the former Attorney General was a partisan Hillary supporter.
Comey asserted that Trump “pressured” him to cease investigating Michael Flynn. Trump didn’t order Comey to stop that probe. And Trump could have, because the president, in the chain of command, is over and above the Justice Department and the FBI. Oops. That’s right.
Attorney Alan Dershowitz : “Comey confirmed that under our Constitution, the president has the authority to direct the FBI to stop investigating any individual. I paraphrase, because the transcript is not yet available: the president can, in theory, decide who to investigate, who to stop investigating, who to prosecute and who not to prosecute. The president is the head of the unified executive branch of government, and the Justice Department and the FBI work under him and he may order them to do what he wishes.”
“As a matter of law, Comey is 100 percent correct. As I have long argued, and as Comey confirmed in his written statement, our history shows that many presidents—from Adams to Jefferson, to Lincoln, to Roosevelt, to Kennedy, to Bush 1, and to Obama—have directed the Justice Department with regard to ongoing investigations. The history is clear, the precedents are clear, the constitutional structure is clear, and common sense is clear.”
Was Comey investigating Trump’s “Russia connections?” Business Insider: “President Donald Trump’s private attorney, Marc Kasowitz, on Wednesday said his client felt ‘completely and totally vindicated’ by James Comey’s prepared opening statement to the Senate Intelligence Committee.”
“Comey’s remarks, released Wednesday in advance of Thursday’s Senate hearing, confirmed previous statements by Trump that Comey had told him three times that he was not personally being investigated amid the FBI’s wide-ranging inquiry into Russian meddling in the election and the Trump campaign’s possible ties to Russia.”
So…where were Comey’s revelations yesterday? Nowhere. Where were his explosive charges about Trump’s crimes? Nowhere.
Comey should really take a long vacation. He should disappear from public life for quite some time. He’s embarrassing himself.
Recall the last bad movie Comey starred in. The Hillary email server scandal. The FBI probe was off, it was on, it was off. Early in this fiasco, Comey delivered a televised press conference. FBI directors don’t hold press conferences, but Comey did. He simultaneously played the role of FBI head, grand jury, Attorney General, and Constitutional jurist. He only held one of those jobs, but that didn’t stop him. He laid out, end to end, Hillary Clinton’s violations of federal law governing the handling of classified materials. He failed to note that “hostile intent” is no part of that law. He failed to note that negligence is the only standard for prosecution. He said that since Hillary (who was surely negligent) didn’t intend to cause harm to the nation, he wasn’t recommending prosecution. Now THAT should have been the subject of a Congressional hearing. But it wasn’t.
Before that, Comey starred in a little known movie called HSBC.
In 2013, before his appointment as FBI director, Comey was brought in by the scandal-ridden HSBC Bank, to oversee efforts to clean up its act—in particular, money laundering for drug cartels.
Comey was positioned as the face of honesty and competence for HSBC.
How well did he do, before he exited his position? How much crime and how many criminals did he leave behind?
Three years later, after Comey had departed, The NY Times wrote: “HSBC Bank Executives Face Charges in $3.5 Billion Currency [Fraud] Case … Traders Use Front-Running to Profit From Client Orders…”
I guess Comey didn’t clean up the HSBC mess. There were a few things he didn’t notice while he was there. A few thing he left behind. A few billion things.
I guess that uniquely qualified him for appointment as FBI director.
So here is my memo. It’s directed to Netflix, Amazon Prime, Hulu, and assorted Hollywood studios: “Before you sign Tom Hanks, Alec Baldwin, Stephen Colbert, Michael Moore, or Caitlyn Jenner to star as James Comey in a heroic biopic, ‘Don’t Cry for Me, America,’ check your brains. It’s a loser.
This article first appeared at NoMoreFakeNews.com.
CLINTON FIXER IS RIGHT!!!

Former FBI Director made sure Clintons were never prosecuted

Clifford Cunningham | Infowars.com - JUNE 7, 2017
Attorney General Jeff Sessions has ended an Obama-era program allowing prosecutors to force companies to make payouts to political groups as part of settlement agreements, a program lambasted by Republicans as a slush fund for far-left groups.
In a memo addressed to 94 United States Attorneys’ offices, Sessionsindicated he was ending the practice allowing companies to meet the terms of settlement agreements by donating money to organizations that were neither victims nor parties to the case, arguing the money should be donated to the victims in the case or the U.S. Treasury instead.
“When the federal government settles a case against a corporate wrongdoer, any settlement funds should go first to the victims and then to the American people – not to bankroll third-party special interest groups or the political friends of whoever is in power,” Sessions said in a statement.
“Unfortunately, in recent years the Department of Justice has sometimes requires or encouraged defendants to make these payments to third parties as a condition of settlement,” he added. “With this directive, we are ending this practice and ensuring that settlement funds are only used to compensate victims, redress harm, and punish and deter unlawful conduct.”
Judicial Watch president Tom Fitton argued the program, first revealed through an investigation by the House Judiciary Committee, amounted to politically-motivated extortion of businesses by the federal government.
“Advocates for big government and progressive power are using the Justice Department to extort money from corporations,” Fitton saidduring an interview on Fox News. “It’s a shakedown. It’s corrupt, pure and simple.”
Bank of America was ordered to pay numerous nonprofit organizations as part of a $17 billion settlement reached with the Justice Department under then-Attorney General Eric Holder to resolve an investigation into its role in the 2008 financial crisis.
Among the left-wing organizations that received money from businesses through settlement agreements reached with the DOJ included the National Council of La Raza, the National Urban League, and the National Community Reinvestment Coalition.

YEP, REVEALING THE POLITICAL-HACK SCUMBAGS...THAT'S ALL THAT WILL HAPPEN WITH THIS...

ANOTHER ONE OF COWARDLY COMEY'S CRIMES ...


EVERYONE INVOLVED IN THIS SHOULD BE HUNG BY THE BALLS ... AND THE WOMEN SHOULD BE FORCED TO DEAL WITH THE RAPE VICTIMS FACE-TO-FACE ... GRRR-ROARS!!!

DO WE REALLY NEED THIS IN OUR COUNTRY? DON'T WE HAVE ENOUGH PROBLEMS TO SOLVE IN OUR SOCIETY???

Police are not treating stabbing as terrorism