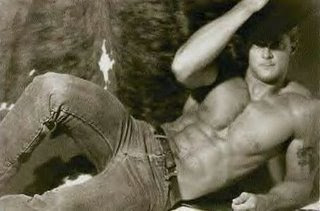 Late night yowls, my purty, catch-a-cowboy Pussycats... the large crescent moon is stunning in the cloudy windy night sky... and some nasty storms could be moving in right now... ya never know, given they often go north or south of the tame prairie...
~~~~~~

There was no way on the sacred green Earth that Dontoya could deny himself. His gorgeous mate pressed her full soft lips against his crown. When she slipped her warm wet mouth over his cock's head and languidly sucked him, Dontoya growled from the depths of his loins -- a black blaze of need. Pleasure seared the entire length of his painfully engorged shaft. Concerned she would misinterpret his beast's growl, Dontoya threaded his fingers through her hair, then tenderly cupped her head between his palms. "Sherilyn," he managed in a rough facsimile of his human voice.
~~~

Featured at SHAPESHIFTER SEDUCTIONS ~ Purple Boots, A Mink Stole and Jingly Bells... by Serena ShayPrudence Penelope sashayed down the hall towards sin. There wasn’t a more appropriate name for the room painted in arousal red and containing apparatuses which must have been designed in hell."Breathe." Between the gentle reminders to continue taking in air and the tippy-tap of her purple fuck me boots Penelope assumed everything would be okay.Dante’s call letting her know there’d be a room ready at the pleasure club by six left her floored. While Penelope adored spending time at Dante's, especially in sin, no way could she maintain her word to Burgess under such strain.
~~~

Yahoo wasn't posting messages on the two author loops the Kougar tried to use today... so...?
~~~~~~
UFO Update: a couple of nights ago, the Kougaress was gazing at the night sky because there was large blasts of cloud-bank lightning... she checked the weather map and there was a storm in that area, although it didn't hit the tame prairie, moving southeast... anyhoo, as she searched the night sky and stared at two bright celestial objects in the southern sky trying to identify if they were planets or stars, she saw a blinking line of colored lights like a slim arrow. As she continued observing, the object didn't move and appeared to be curved as in a circular shape... it was certainly no star or planet.
~~~~~~

Robotic Elimination... Wow, what a cool title and plot for a military thriller. You, too, Mr. & Mrs. American Citizen, can now qualify for what the military has termed, ROBOTIC ELIMINATION. If for any reason, whether logical or illogical, you are deemed a suspected terrorist, are even suspected of criminal behavior, or 'might' be thinking of a pre-crime -- and nowadays everything is a crime -- or, hey, what if someone just doesn't like you? ... well, guess what, 'they' will *send in the drones* to bomb you and yours out of existence. [btw, it is now a crime in some areas to have a birdbath with water in it... yeah, mosquitos might breed.]
~~~~~~

In yesterday's blog titled, Kiddies, wanna be a cowgirl or cowboy... forget about it..., this Big Cat discussed one more new rule by the gov in an endless series of new bureaucratic rules [all of them actually unlawful, but that never stops them these days] ... well, due to the outcry of the public, it has now been TEMPORARILY rescinded... yeah, right, just like the turncoat congress didn't pass the last cyber-nightmare bill due to opposition, well they came back with a vengeance in the CISPA bill. Hey, *no* fourth amendment allowed on the internet, plus a lot of other draconian horrors are included.
~~~~~~
This song came to mind yesterday. The Kougaress believes the lyrics speak a great and precious truth. THIS LAND IS YOUR LAND words and music by Woody GuthrieChorus:This land is your land, this land is my landFrom California, to the New York IslandFrom the redwood forest, to the gulf stream watersThis land was made for you and meAs I was walking a ribbon of highwayI saw above me an endless skywayI saw below me a golden valleyThis land was made for you and meChorusI've roamed and rambled and I've followed my footstepsTo the sparkling sands of her diamond desertsAnd all around me a voice was soundingThis land was made for you and meChorusThe sun comes shining as I was strollingThe wheat fields waving and the dust clouds rollingThe fog was lifting a voice come chantingThis land was made for you and meChorusAs I was walkin' - I saw a sign thereAnd that sign said - no tress passin'But on the other side .... it didn't say nothin!Now that side was made for you and me!ChorusIn the squares of the city - In the shadow of the steepleNear the relief office - I see my peopleAnd some are grumblin' and some are wonderin'If this land's still made for you and me.Chorus (2x)©1956 (renewed 1984), 1958 (renewed 1986) and 1970 TRO-Ludlow Music, Inc. (BMI)
~~~~~~

From UNKNOWN COUNTRY ~ unknowncountry.com/revelations/latestWednesday April 25, 2012Our Unstable Sun and the Future of Civilization Robert Schoch is the geologist who proved that the true age of the Sphinx is 10,600 years, based on the fact that the sandstone is water-eroded. Here he explains why the last ice age ended so suddenly--it was a massive solar storm that lasted for years. He explains that our sun is actually an unstable star that goes through periods of extraordinary instability, and discusses when it may happen again. Incredibly, rock engravings from the distant past actually depict the type of plasmas that would appear in the sky when extreme solar events were underway.
~~~~~~

BIG CAT SNARL AND SNARK ~ Oh, yeah, here's a tin-hat conspiracy that is actually true. These 10 Corporations Control Almost Everything You Buy A chart we found on Reddit.com today shows that most products we buy are controlled by just a few companies. It's called "The Illusion of Choice." Ever wonder why you can't get a Coke at Taco Bell? It's because Yum! Brands was created as a spin-off of Pepsi--and has a lifetime contract with the soda-maker. Unilever produces everything from Dove soap to Klondike bars. Nestle has a big stake in L'Oreal, which features everything from cosmetics to Diesel designer jeans. Despite a wide array of brands to choose from, it all comes back to the big guys.
~~~~~~
The most powerful weapon is the human soul on fire.

~ Have a magickal awakening in April ~

~ MAY YOU ALWAYS HAVE ENOUGH ~
And, May you live the dreams of your heart, not in interesting times...

Catch-a-cowboy Pussycat kisses from the Kougar...

Oh, Woody Guthrie wrote some fantastic songs! I've always enjoyed his music. And I adore his son's. Arlo Guthrie music has gotten me through many stressful times in my life!

Woody and Arlo Guthrie are definitely very special in what they given us, given to the world. And, I'm constantly reminded in these times how important land and family is.

Sherilyn, Zance and Dontoya are definitely exploring and expressing their sexy sides. ~grins~