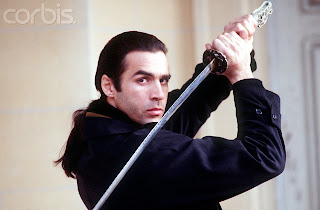 Adrian Paul as the Highlander... dangerous and ultra sexy...
Nighttime yowls, my darling and precious Pussycats... Spring-warm day on the tame prairie today... the closing-in-on-full moon hung fairly high in the eastern sky late this afternoon... always a lovely and mystical sight to behold.
~~~~~~

Really Dangerous Bad Boys ... okay, the Kougaress has never had a crush or a 'thing' for a Mafia-type bad boy... in fact, she was puzzled for a long time about what the attraction was... well, okay, power is an aphrodisiac to the female sex... yep, this Big Cat girl understands that one. Very well. Dangerous men are irresistible, a turn-on for some women because if he's on your side, then he'll protect you from other dangerous types, an maybe from the world. Biology always plays a bigger role in attraction than we generally realize. However, NOW this Big Cat has another, newer understanding of why this particular attraction happens for women. This realization is because of the current horribly corrupt times we live in. Corruption rules about everything these days, so a woman might, at an instinctive level, want to be with a man who has a better shot at taking care of her, of protecting her fiercely. This would include any children she might bear. As the Kougaress considers her words, this desire for alpha strengths can be compared to desiring one of the warlords in an embattled region. From a personal female perspective, while the Kougaress still doesn't have any desire for a mafia-type bad boy, her attraction to a man has changed with the times. A warlord-philosopher with a high level of intelligence, or a comparable rancher-cowboy type, would definitely turn her head, and her heart.
~~~~~~

Straight from the Carnal Cherub himself...

Angelic Forecast ~ #187
This week, those who FEAR freedom and courage -- THOSE who fear any act of goodness, or anyone with a good heart -- THEY now rise like leviathan serpents.One of their primary 'divide and conquer' weapons against us *the people*, will be fostering race wars and class wars worldwide. These 'soulless ones' will attempt to light these 'wars' like bush fires in order to loose a firestorm of horror and chaos planet-wide. For, THEY must complete their evil endgame by the end of 2012 -- so they believe.To this endgame, draconian measures against humanity will escalate. At the same time, LOVE and FREEDOM will soar on the wings of the angels lifting everyone toward a greater destiny. This destiny belongs to you. Grab hold and don't let go.THE TRICKSTER force is one of the driving energies for the month of April. This will instigate the Rise of the Rabbit Tricksters. This means the population will align with their inner dragon strength, and learn how to deceive the jackboot system in effective ways. Thus, as oppression grows it will be met with clever opposition.One such opposition is the mushroom-springing up of local script, or local currencies. New ways to trade and barter among ourselves will be discovered, and will be the salvation of many in these upcoming times.At this time, another great division comes about on our world. There will be those who grow-up to the current diabolical reality, and take immediate action for the sake of themselves and their loved ones. Others will remain in a state of arrested development, choosing to believe in a kindergarten-like world as presented to them by big media.On the economic front, the sins of the giant corporations will continue to be revealed at a rapid pace. This week there will also be a major push to bring about a 'one world' banking system. This will be done by making all of us believe this is the ONLY solution. It's not.On the truth front, the 'paranormal' and UFOs are likely to be in the spotlight. Also, the real truth about humanity's ancient heritage ascends like a rocket ship. However, this truth will only be available to those who truly want it, and who will now begin to live in accordance. As well, many more of us will begin to see beyond the lies of the evil powers-that-be.On the war front, games will continue to be played behind the scenes by the BIG CORP BOYS and GIRLS. New deals will be made, and the drums will pound faster and even louder. Every effort will be made to instill larger doses of FEAR into the populace at large. BEWARE!On the AWAKENING front, the medical industry will be under heavy scrutiny by 'the people'. The high level of corruption will become more apparent to All, and this awareness will spread like wildfire. So-called alternative treatments will soon become the norm for many.On the personal front, watch for the 'trickster' or the deceiver. This could be anyone who crosses your path, or anyone in your life, even those you have trusted in the past. At this time, con games will begin to permeate society as people look for ways to survive financially. Also, those professions who were trusted without question before, will be rejected by more and more people as knowledge of their deception sweeps across society -- via our Aquarian connection with each other.On the food front, look for bargains that allow you to stock up, and those of you who garden, plant while the sun shines -- plant as many food plants as you are able. This will be crucial to us all.On the land changes front, strangeness rules. Explosions and odd sounds that are not being explained will likely continue. Mother Earth is changing her appearance because it is time. In concert with the powerful vibes of the sun, Mr. Sol, she will keep creating Herself anew.On the really bad news front, look for a rise in false-flag events across the globe.Trendwise, The Quantum Launch Point is here. From now on 'time' and the days, the months, will speed by so fast, it will feel like a series of quantum leaps and launches.What to do? Ride the dragon energy whenever you can, when it serves you in your life. And when you aren't able to ride this fierce energy, it advisable to stay out of the way.At this point in history, the world will be changing at super-speed. Both, for the good and the bad. And, by the WILL of the people.Know this: by the end of 2012 the world will be far different. Look for ways to assist the good changes. As well, look for opportunities in the market place to sell your products, your services, your talents, and your knowledge.This is a week to raise your voice in song by yourself, or with others. Let your soul sing with every good thing you encounter.

The Kougar is running on low batteries right now. Part of her is feeling creative for her Tuesday post at SHAPESHIFTER SEDUCTIONS... however, it feels like reaching for an impossible dream...
~~~

Featured at SHAPESHIFTER SEDUCTIONS ~ Dressed to Grillby Pat Cunningham Like most creative types, Jase Dearborne loved what he did for a living. Except when it sucked. Like now.“Why aren’t you working?” he muttered to himself while he stalked around the dressmaker’s dummy. He ran his hand through his bristly hair—plum this week, the same rich shade as the shimmery fabric draped on the dummy. A bit too matchy-matchy. Maybe that was causing his block.
~~~~~~

The most powerful weapon is the human soul on fire.

~ Have a magickal awakening in April ~

~ MAY YOU ALWAYS HAVE ENOUGH ~

And, May you live the dreams of your heart, not in interesting times...

Spring-warm day kisses from the Kougar...

Do bad boys, who are really good guys pretending to be bad boys count? 'Cause their my favorites!! ;)

Oh, absolutely. If they're pretending to be bad boys for a good reason... gotta love them!