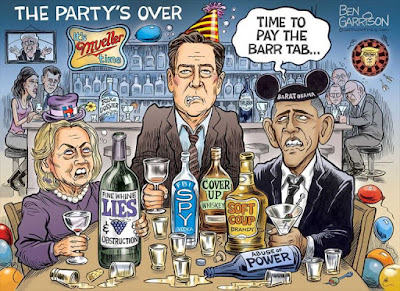 After midnight howls, yowls, growls... most wonderful and springtime-wild KitKats... so, the Kougar meant to post this blog before the previous blog about the Divine destruction of Monsatano ... this Big Cat was also going to talk about Soph, the 14 year old phenome, who is similar to the Kougar when this Big Cat was 15 years old... but that will have to wait, given the sheer tiredness overcoming the Kougaress ... the main reason for this post: HERE COMES THE SUN ... or a couple of CME's [coronal mass ejections] are headed for EARTH, as explained in the video below...

YEAH, POUND SAND, NO-NADS NADLER ... THE KOUGAR SCREAMED WITH LAUGHTER OVER THIS... THIS IS GETTING TOO GOOD NOW... AG Barr Mocks Pelosi to Her Face: “Madam Speaker, did you bring your handcuffs?”


THE SUN, SHOOTING CORONAL MASS EJECTIONS AT EARTH... LOTS OF GOOD STUFF IN THIS VID...

TERRORISTS AGAINST 'WE THE PEOPLE' CONTROL SOCIAL PLATFORMS...


ALL POWER AND PRAYER TO ROGER STONE ... DIVINE JUSTICE NOW!

Stone has challenged the central premise of Russiagate


IMMEDIATE DEATH TO THE FEDERAL RESERVE AND THE GESTAPO IRS!!! IT'S COMING...

Americans’ liberty and prosperity will never be secure until Congress repeals two great mistakes of 1913: the income tax and the Federal Reserve.


Last week the New York Times published some of President Trump’s 1980s and 1990s tax returns information. The information detailed President Trump’s financial difficulties during that time. While you would not know it from reading some media reports, this is old news. In fact, President Trump openly discussed his financial difficulties on his popular reality television show.
What should be of great concern is the possibility that the person who leaked the returns — who the paper says has legal access to President Trump’s tax records — is an IRS employee seeking to undermine the president. This would hardly be the first time an IRS employee has leaked confidential information because he disagreed with the taxpayer’s politics. In 2014 the agency had to pay the National Organization for Marriage 50,000 dollars after an IRS employee gave names of the group’s donors to the group’s opponents.


In 2014-2017, my Campaign for Liberty group was repeatedly threatened by the IRS because it refused to give the agency the names of and other information about its top supporters. Fortunately, the IRS rescinded the regulation forcing groups like Campaign for Liberty to violate supporters’ privacy or face legal penalties. However, campaign finance reform legislation that recently passed in the House of Representatives would require the IRS to resume collecting this information, and the New York attorney general is suing the IRS to force the agency to reinstate the regulation.


The right of groups like Campaign for Liberty to protect their supporters’ privacy was upheld by the Supreme Court in NAACP v. Alabama. As Justice John Marshall Harlan wrote, “Inviolability of privacy in group association may in many circumstances be indispensable to preservation of freedom of association, particularly where a group espouses dissident beliefs.”
Traditionally, presidents have used the IRS to harass their political opponents instead of presidents’ opponents using the IRS against them. Franklin Roosevelt audited people critical of the New Deal and supportive of the America First movement. Lyndon Johnson ordered audits of opponents, and John Kennedy shared tax return information with Washington Post editor Ben Bradlee.
During the Obama administration, the IRS targeted groups opposing Obamacare. The agency went after anti-Iraq War groups during the George W. Bush years.
If the Times did obtain Trump’s tax returns information from an IRS employee, that employee is not in the same category as whistleblowers like Edward Snowden or Chelsea Manning who exposed government wrongdoing. The leaker or leakers of President Trump’s information are releasing private tax information.
The IRS regularly violates the civil liberties of taxpayers generally. In fact, the income tax system forcing taxpayers to reveal potentially incriminating information on their tax returns violates the principles of a free society. Americans’ liberty and prosperity will never be secure until Congress repeals two great mistakes of 1913: the income tax and the Federal Reserve.
This article first appeared at RonPaulInstitute.org.

THE KOUGAR WAS NOT RAISED WITH THIS PARTICULAR HAND SIGN, THE A-OKAY SIGN BEING CURRENTLY MISREPRESENTED AS A WHITE SUPREMACISTS HAND GESTURE ... SHE FIRST SAW THIS SIGN DONE ON THE ENTERTAINING 7-UP COMMERCIALS -- WHICH SHE ACTUALLY LIKED-ENJOYED THESE ADS, UNLIKE MOST STUPID TV ADS... LOOKS AS THOUGH THEY'VE SCRUBBED THE COMMERCIAL WITH THE PROMINENT *OKAY* SIGN AS THIS BIG CAT VIVIDLY REMEMBERS IT ... THE HAND SIGN IS BRIEFLY SEEN IN THE FIRST VID...

This is entirely frustrating, but this Big Cat 'knows' she saw Geoffrey in his tropical setting with his white suit and panama-type hat ... yes, holding a glass of 7 Up and doing the Okay hand gesture... she remembers vividly because she loved the whole feel and visual of that commercial ... so, either that has been scrubbed or the Mandella effect is happening...


Gay, liberal atheist British television presenter Stephen Fry is being labeled a “white supremacist” because he did the OK hand sign.


Fry flashed up the dangerous symbol to promote Mental Health Awareness Week, tweeting, “Are you A.O.K?”

Vaccine injuries, lifelong disabilities and death in China have sparked major riots with the government responding with censorship and force

But it’s a ‘symbol of feminism’ according to leftists


A video out of Iran shows a screaming woman being dragged away and arrested by police for not wearing her hijab.


The clip, which was posted to Twitter by a human rights activist, shows the woman being manhandled by uniformed officers as she attempts to resist.

This is the reality of Islamic Republic of Iran.

“This is the reality of Islamic Republic of Iran,” wrote Ashraf Baloch. “Today in Inghelab street police savagely arrested this woman for protesting compulsory hijab.”


As this video shows, women in Iran are routinely harassed not just by police but by other Iranian men for not covering up.

I will be posting this video again on 'World Hijab Day'.

While women in Iran risk arrest, incarceration and torture for protesting against the hijab, the Islamic veil is celebrated by leftists in the west as a symbol of feminism.
Last year, CNN was slammed for championing the new ‘hijab barbie’.
As the video below documents, The very first Arab feminist groups discarded the hijab.
The first thing women in areas of Syria areas liberated from ISIS oppression did was discard the hijab.
According to Muslim reformist Asra Q. Nomani, the Islamic veil “segregates, subordinates, silences, jails and kills women and girls around the world.”


The hijab represents the oppression and subjugation of women throughout the Middle East, so why does our media and culture celebrate it?

There is a war on free speech. Without your support, my voice will be silenced.

Please sign up for the free newsletter here. Donate to me on SubscribeStar here.


Support my sponsor – Turbo Force – a supercharged boost of clean energy without the comedown.

WELL, THIS IS ENTERTAINING...

‘DUDE, THAT WOULD BE SO FUNNY’: Navy Finally Releases Findings From Probe Into ‘Sky Penis’ Drawing

NO ONE NEEDS CHINA'S COMMIE-FASCIST TYRANNY ... INDIA IS WAITING IN THE MANUFACTURING-WINGS Steve Hilton: China Imports Are Less Than 3% of US Economy – We Don’t Need China! (VIDEO)

DAVE JANDA DID AN EXCELLENT BREAKDOWN ON HIS YOUTUBE-CHANNEL REPORT


DENVER NEEDS TO SHIP THEM RIGHT BACK, AND SUE NEW MEXICO...

NM Governor Who Left Border Open over Trump’s “Charade of Fear-Mongering” — Sees Illegals Flood Across Border, Then Buses Them to Denver ONE CAN ONLY HOPE THEY SHOOT EACH OTHER, AND DON'T GET AWAY WITH ANY HORRIBLE FALSE FLAGS ...

NO TAX RETURNS FOR YOU!